One of the most important recommendations for playing slots and making some profit is to get familiar with the slots payouts and odds for the machine you are playing. The payouts differ for different slots types, machines with different coin denominations and number of reels. 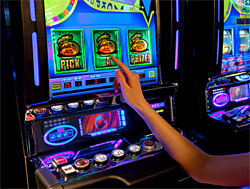 To get acquainted with the slots payouts for a particular machine, one usually consults a slot payouts table (also known as pay schedule or pay chart). It is available either on the face of the slot machine, or on the different screen of the modern video slot. Payout table for slots displays the amount of coins the player may win for a certain combination of symbols that may come out on the slot payline and the number of coins needed for the bet.

The slot machine payline actually represents the sequence of symbols on the reels that may be paid out in case the player bets on them. The payline the player has bet on is called active. The symbols are crossed horizontally, vertically, diagonally or in zigzags. At least two identical symbols in a row already make a winning combination (in case the first symbol comes on the first reel). When a certain combination of symbols comes out with a spin of the reels, it is then compared to the winning combinations displayed in the slots payouts table.

The payout percentages for each machine are set within computer chips installed when the machines are manufactured. Certain machines are considered to be set to hit more often than others and are called "loose". In fact, the probabilities for hitting a winning combination still depend on the use of the slots Random Number Generator, or RNG pre-programmed for every slot machine. Most players misunderstand the principles according to which the RNG works, which leads to the establishment of a whole set of myths.

In reality, the RNG, which is seen as the "brain" of the slot machine, is a program generating millions of numbers that will correspond to certain symbols on the reels. The RNG selects values later translated into sets of numbers defining the winning combinations. These combinations will be pre-set the very moment the player pushes the "Spin Reels" button or even inserts the coins.

The slot machines odds are different for classic mechanical reel slots and modern video slot machines. The odds for traditional reel slots are defined by certain mechanical devices. Each reel accommodates a certain number of symbols, and the chances for hitting a particular symbol are counted through dividing it by the total number of symbols on each reel. For example, the chances of hitting one symbol on a 3-reel slot with 10 symbols on each reel are 9 to 1 (1/10), for two symbols it is 99 to 1, and 999 to 1 for three symbols in a row.

One of the recommendations on how to win at slots is to always choose slot machines that offer the highest slots payouts for the lowest winning combinations on the paylines. Such machines offer smaller but more frequent payouts. Other guides recommend making maximum bets on maximum number of lines, which may provide for the largest jackpot. It is also possible to choose skill stop machines that include a certain degree of the player's skill apart from the traditional slots that are based on mere chance.