Skill stop machines have gained much popularity due to the fact they offer an element of skill from the player to the slot gambling process that is otherwise based on mere luck. While traditional slots require the players to simply push the button, skill stop machines include additional skill stop buttons placed in between the reels of the slot machine. Pushing the buttons the player is able to bring any of the reels to a stop, thus getting some degree of control over the game process. 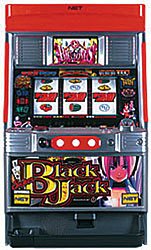 Nowadays you don't find much of the skill stop machines in the USA. The casinos simply gain too much from the traditional slot machines based on chance to allow games requiring any degree of skill that could be mastered by the player.

Skill stop machines are most popular in Japan, where they come under the name of Pachislo (combination of words "pachinko" - another popular Japanese gaming machine - and "slots"). Pachislo machines offer changes to the slot machine technology as here steel balls are included in the game process:

Modern reel slot machines with skill stop buttons that are represented in international casinos usually have three reels and offer a wide range of special visual and sound effects, just like the advanced video slots.

Skill stop machines are still concerned with a high degree of luck. In fact, the players just attempt to stop the reels so that they gradually come to a halt and finally stop on certain symbols. There is no actual chance to stop the reels right when you want them to stop. This means that the "skills" for playing skill stop machines are quite illusory.